Presently, Srinivas University offers undergraduate, postgraduate, and research courses under 8 Faculties/Colleges with about 60 courses. The University made innovations in designing and starting new super speciality programmes both in UG, and PG level as per present and future industry relevance, innovations in examination system through focus on continuous evaluation and to make it foolproof. The University has established networking with many industries, universities, and Education service providers to substantially improve the quality and weightage of the courses and degrees respectively. Presently Srinivas University has Eight Colleges offering innovative industry oriented specialized courses of UG, PG, and Research levels. 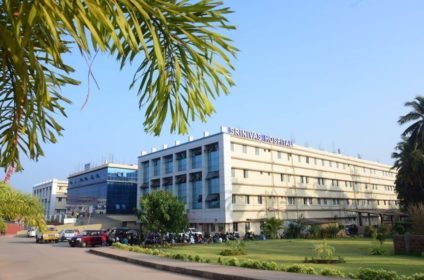 Book Admission in this college

* Booking is totally free and seat is subject to availability

Over all the campus is good with well equipped faculties and infrastructure. The faculties are very friendly and gives a broad ideas for the future to explore. But their is a poor management In giving marks card etc.

It’s a very good colleg..within the city limits.students are always happy wit the opportunities dey get nd dey happy to b a part of the colleg.

First of all i joined here because it is near to my home and when compared to other colleges it has less fees and also within the city. I opted for this course because i always wanted to be a profeesional. And the best thing here is that the lecturers are also quite friendly with you and are also available to serve you with your doubts.

Srinivas University is one of the top college in Mangalore and it is the only college in Mangalore which provides highest number of courses. College infrastructure is great. Colleges follow greenery and good in cleanliness. The laboratories are well maintained with all the latest equipment. Facilities like library, sports room, hostel, Wi-Fi, ATM etc are provided by college.Fees structure is not such high compared to other colleges.

The syllabus is regularly updated as per the latest industry standards and trends. Syllabus covered the academic part as well as the personality development part in order to deliver managers of the future. Most of the learning was practical. For the first two semesters, we studied general management subjects and later on, we studied a mixture of specialization subjects and other additional subjects.